This morning, the Knights of Columbus celebrated the final liturgy of their 129th Supreme Convention. The annual memorial Mass commemorates Knights and their family members who died over the past year.  The main celebrant was Bishop William E. Lori, S.T.D., the Knights' supreme chaplain. Bishop Lori's homily is published below. 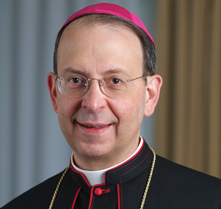